It all began in April 1956 when “a motley team of 12 year olds trooped onto the field to inaugurate the Saints tradition”. At this time, St Ives was still a largely rural community made up of market gardens and orchards. Since then, an extraordinary number of players, volunteers and supporters have worn the club colours with pride.

After club restructuring in 2018, A cohort of old boys revelled to form an old boys association. This union is focused on maintaining the club’s long history, reuniting old friendships and fostering important rugby programs.

Keep up to date, share the magnificent past  and collaborate for a prosperous future

Connect with the old boys group or share some history or photos. 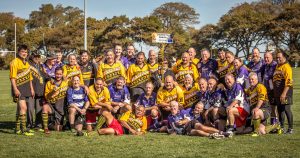 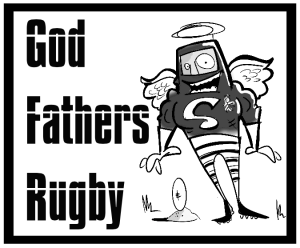 For those still kicking, you are welcome to join our tip footy group on Monday nights at Hassall Park. The group is very inclusive no matter your age or gender.

We are also seeking interested players for a possible golden oldies team in the near future.

In honour of the late & great John Zampa (The Godfather) the oldies group continues to share and spread the spirit of rugby.

If you would like to express interest in either Golden Oldies or play touch footy on Monday nights at Hassall Park contact;

The spirit of “Golden Oldies” is epitomised in the motto of “Fun, Friendship, Fraternity”.

This international motto is the central theme of every Golden Oldies game.

All players must be correctly attired for Golden Oldies Rugby at all times including footwear (low profile studs or grass sport shoes) and mouthguard.

These rules do not permit offside play, over-vigorous play, unsportsmanlike behaviour and have been designed to increase the enjoyment of the game while minimising the chances of injury.

The normal laws of rugby as per the International Rugby Board (IRB) shall apply with the following law variations (unless varied by mutual agreement between teams and officials):

Coloured Shorts
All players are to observe the restrictions on tackling “older” players. These are identified by coloured shorts.

Claiming
“Claiming” (wrap-around) can best be described using this example.
The player with the ball (a wearer of red shorts) cannot be tackled but can be claimed or held by wrapping ones arms around his body to prevent further forward movement, but they must not be thrown to the ground and they must be able to free the ball to play it. In other words, you can hold them (or ‘hug’ them gently) but do not tackle them.

The defender can stand in front of the player with the ball (the red shorts player) with outstretched arms to prevent further forward movement, again allowing the player to play the ball.

Please complete this form for any general enquires

Please fill in all of the required fields 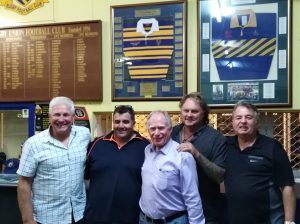 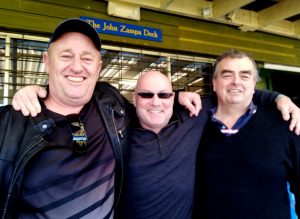 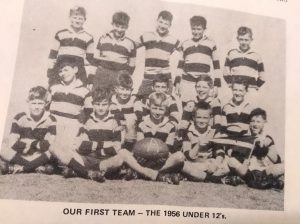 This page is being built… A link to access archive of photos will be available soon.

It all began in April 1956 when “a motley team of 12 year olds trooped onto the field to inaugurate the Saints tradition”.

At this time, St Ives was still a largely rural community made up of market gardens and orchards. Since then, an extraordinary number of players, volunteers and supporters have worn the club colours with pride.

The Club was established at a meeting of interested fathers , mainly from St Ives Central Public School , at the home of Ray Badger in Memorial Ave, St Ives. The meeting was called by Fred Layton and John Carroll in response to Gordon Rugby Club’s Learn to Play Rugby promotion at the time. Having canvassed all the local schools, Fred and John then called a meeting at St Ives Central Public School to launch St Ives Rugby Club to the Community.

An Under 12 Team was fielded in the Gordon Junior Rugby competition with play commencing in 1957. The first training run was on Turramurra Memorial Oval before the Club moved on to play our first competiton games on the Village Green at St Ives adjacent to where the community hall now stands.

The founding President, Fred Layton, was inspirational in the amount of time and effort he put in to our Club, arranging to pick up and deliver boys to and from their homes on both training and playing days as well as canvassing all the local businesses for assistance by way of donations of trophies and incentives. Milkshakes and chocolate frogs at the local delicatessen were very popular. The dedication of Fred Layton was vital to the survival of the Club, which was incorporated with the Terrey Hills Club until the late 60s. He remained Club President for ten crucial years.

In 1958 we fielded our first Under 10 team and the Club’s motto was ‘YOU PLAY FIRST RATE IF YOU START AT EIGHT’.

The Club needed to grow so Fred went further afield and enlisted boys from Terrey Hills including an orchardist , Jack Hanlen, who had 6 sons and a truck he used to carry the boys into St Ives for training and games each week. Next came Clive Thompson from Terrey Hills and his 2 sons, Clem and Reg, and their friends who made up an Under 14 Team. 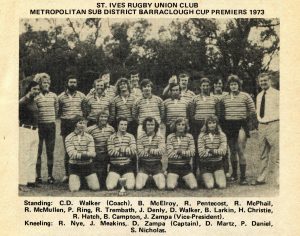 Whilst a struggle at the outset, the rapid growth of the district as a suburban area in the mid 1960s, saw a tremendous growth in the junior ranks. 1959 saw the Club win its first premiership through the Under 10s. In 1963-64 the Club won the Conway Cup for the most successful junior club in N.S.W. The Under 18s won the premiership and the Under 21s were narrowly beaten in their Grand Final this year. The Saints winning habit was well underway.

In 1965-66, the Club fielded eight Under 8 teams and one or two teams in each age group to Under 21s. Home games were played at Hassall Park, then a “gibber” ground, half its present size.

In 1967 the Club elected John Zampa as President and “The Godfather” as he was affectionately known, continued on the good work of his predecessors with his own band of supporters.

In 1967 St Ives entered its first team into the Sub-district competition and so began the rise of St Ives Rugby Club as a force in Subbies Rugby. In 1969 this became two teams. One name that was more than instrumental in that era was the late and great Barney McKay, a true legend of our Club. The Sub-district teams went from strength to strength, winning their first premiership, the McLean Cup, in 1972 and the Barraclough Cup in 1973, a win that saw the Club’s promotion to Division One. 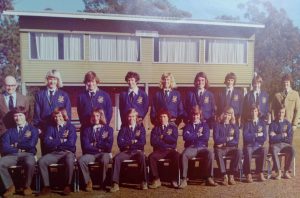 In 1971 with the Juniors continuing to be a powerhouse in local Rugby and now 2 teams in the Subbies Competition, John Zampa and his supporters set about building our clubhouse at Hassall Park over the top of the existing two change rooms. This was indeed an amazing feat considering the difficulties dealing with councils of the time. Since then the Clubhouse has been extended several times and stands today as a testament to all those involved over many years. It is the envy of all visiting clubs.

In 1973, the Club sent its first contingent of two teams, the Under 15s and 16s, to New Zealand, a tradition that has endured to the present.

In 1974 and 1976, the Kentwell Cup was won and the following year 21st birthday celebrations were held in Willoughby Town Hall. The St Ives Rugby Club had certainly come of age. It was independent, being responsible for its own finances and for the running of its own clubhouse and it was having a great deal of success on the paddock in both the Junior and Senior Divisions. The then Life Patron, John Zampa, affectionately referred to as “The Godfather”, wrote: “In a venture such as this, success depends on people, people who are prepared to give of their time, people who don’t just stand back and knock, but who are prepared to give it a go. The Club has these people so we can look forward to a good future.”

These words have proved prophetic as the Club has developed from 1977 to the present. As the Club has enjoyed 30th and 40th year celebrations, it has enjoyed many more premierships and has seen the substantial upgrading of its facilities. Demographic changes saw junior numbers drop in the early 1980s, a slide that was arrested with the game’s increased profile with the local staging of the inaugural World Cup in 1987 and Australia’s success in the 1991 World Cup Final. In the mid 1990s player numbers for the Club topped 350 again, a level maintained to the present. A healthy relationship between the Rugby Club and the St Ives Cricket Club has flourished, providing use of the clubhouse for the cricketers, many of whom are members of the Rugby Club, filling “the summer void”. 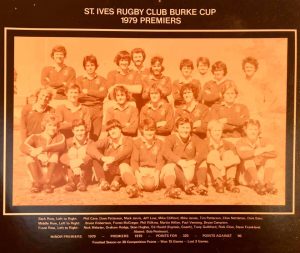 Over the years, St. Ives has maintained its level of representation in representatives, both in Juniors and Seniors. The Premierships have also continued to flow.

With over 60 years behind us, St Ives Rugby Club has good cause to reiterate the Godfather’s claim of more than forty years ago, “we can look forward to a good future”. 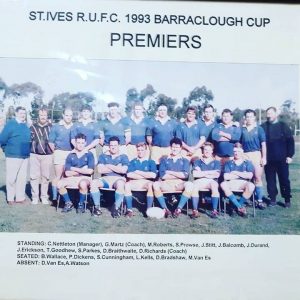 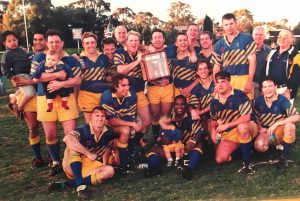 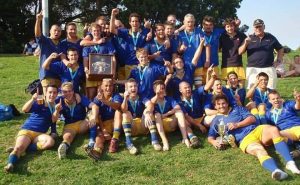 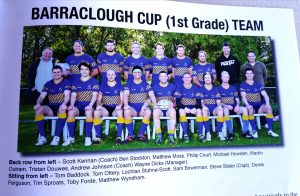 This page is being built. It will house a data base of results and statistics.

If you would like to connect with the Saints Old Boys you can join their FaceBook group here. 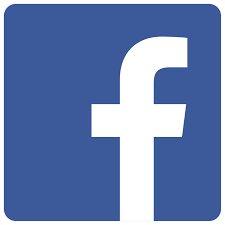 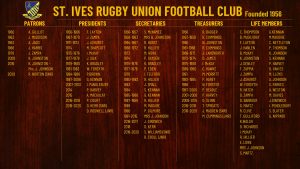 For over 60 years, there are many that have contributed to this great rugby football club on and off the field.

And for many, the Hassall Park Clubhouse has been a labour of love. Some gave much more than the norm.

This page honours those that have taken on the massive responsibility of administering the club and those that have been granted life membership at St Ives Rugby Football Club.